Congratulations to all involved! Getting more farmers paid for soil carbon credits is the reason why PastureMap and Point Blue Conservation Science are working together on capturing soil carbon change and grazing data in one place. We hope this global milestone builds similar momentum in North America to move towards soil carbon credits for regenerative grazing and carbon sequestration.

Today marks an important milestone in the transition of agriculture from a source of greenhouse gas emissions to significant carbon sink. Corporate Carbon is proud to receive the first carbon credits issued for a soil carbon project under the Emissions Reduction Fund. See video.

‘Not only will these soil carbon credits be the first to count towards Australia’s national targets under The Paris Agreement but they are the first soil credits worldwide to be eligible under Paris’, said Corporate Carbon Managing Director, Matthew Warnken.

The credits were received by the Grounds Keeping Carbon Project, which showcases the work of a Victorian innovation and farming system that creates soil carbon in pastures at rates comparable with forests. The Soilkee Pasture Renovator combines cultivation, mulching, aeration and mixed species seeding to improve grazing systems and build soil carbon effectively. The higher the soil carbon levels the more productive and healthy the farm.

‘We are very proud to have achieved this formal recognition for Soilkee’, said founder, inventor and Gippsland farmer, Niels Olsen.  ‘The opportunity for expanding regenerative farming and building soil carbon at scale is phenomenal and we are now ramping up our production to deliver on this potential.’

The soil carbon credits were presented to Corporate Carbon and Niels and Marja Olsen, on their Hallora farm, at an issuance ceremony by the Chair of the Clean Energy Regulator David Parker. ‘He said, ‘Soil carbon capture and sequestration is an innovative emissions reduction measure. There is a triple win in aiding international efforts to address climate resilience, improving soil health and food productivity, and the bottom line for farmers. This project is an example of the co-benefits that can be achieved under the Emissions Reduction Fund, and a beacon of innovation in the Agricultural sector,’ Mr Parker said.

Australia is in a world leading position on soil carbon due to the bipartisan support of successive Australian governments and the work of the Clean Energy Regulator and the Department of the Environment and Energy. ‘This first issuance of credits is as much a recognition of the cumulative effort from early soil carbon farming pioneers and practitioners, as it is a vote of confidence in the ability of soil carbon to deliver millions of tonnes of abatement in the future’, said Mr Warnken.

AgriProve has an ambitious agenda as the Soilkee commercial model is poised to be mainstreamed. ‘Our immediate goal is to involve 100 farms, on 100 hectares, increasing soil carbon by one per cent over 100 months. The longer-term plan is to grow soil carbon farming exponentially’, Mr Wyatt said. 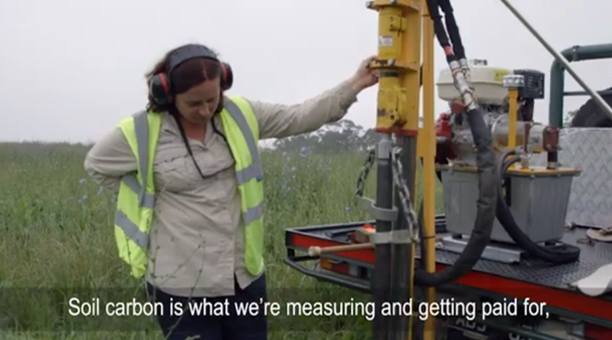 Corporate Carbon was today credited with 406 ACCUs on their Grounds Keeping Carbon project, which uses SoilKee renovator technology to increase soil carbon, in line with the Sequestering Carbon in Soils in Grazing Systems Methodology.

David Parker, Chair of the Clean Energy Regulator—who today presented the first soil carbon ACCUs at the project site near Drouin, Victoria—said this was a great landmark event for the scheme.

“This the first time in Australia a project has generated carbon credits on the land by increasing levels of soil carbon,” Mr Parker said.

“Soil carbon capture and sequestration is an innovative emissions reduction measure. There is a triple win to address climate resilience, improving soil health and food productivity, and the bottom line for farmers.”

“This project is an example of the co-benefits that can be achieved under the Emissions Reduction Fund, and a beacon of innovation in the agricultural sector,” Mr Parker said.

Over 59 million tonnes of abatement has been credited under the Emissions Reduction Fund.